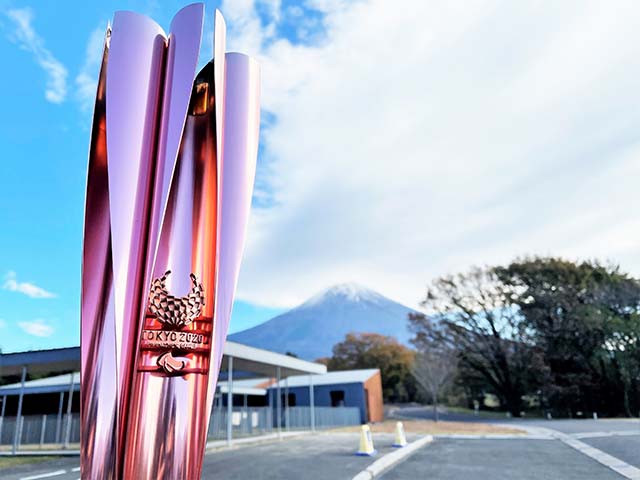 The concept for the Tokyo 2020 Olympic Torch Relay across Japan was "Hope Lights Our Way", uniting the people with the spirit of supporting, accepting and encouraging one another.


The Paralympic torch relay on public roads was cancelled to prevent the spreading of the Covid virus. The selected runners took part in the lighting ceremony instead.

Yoko Sakurai and Triton - 19th August 2021 at Asaka City, Saitama
While working as an acupuncture and moxibustion massage therapist, Yoko belongs to a theatre company as an actress. She decided to apply to become a torchbearer saying, "I wanted to show my appreciation to my supporters and to send positive energy to my friends with disabilities!" The event was postponed for a year, and despite the controversy, she worked tirelessly to take care of herself not to be infected with Covid. On the day of the event, a mixture of anxiety and excitement greeted her, and as she took each step, she was overwhelmed with happiness and found herself smiling. "Triton has been a guide dog for only a year, so he is still a novice, but he supported me without hesitation, thanks to everyone."

Yasuko Miyake and Erin – 22nd August 2021 at Kokubunji City, Tokyo
Yasuko used to be reluctant to speak in public because she was shy, but now that she walks with her guide dog, she is motivated to speak up. She has been giving lectures at schools and companies, saying, "I want many people to know about guide dogs." She applied to be a torchbearer as if she were buying a lottery ticket. So she was pretty surprised to be chosen. "It's an important role, so I practised running with Erin. I hope that as people see us, it will lead to a norm of our society for guide dogs to walk the streets." At the lighting ceremony, she said: "I was very moved by the fact that we were connecting not only the torch but also the thoughts of all the people involved in the process."

Ryu Nakazawa and Deneb – 23rd August 2021 at Setagaya, Tokyo
Ryu is a para-triathlon athlete who says he is driven by the desire to try and challenge himself in everything he does. JTU (Japan Triathlon Union) recommended him to become a torchbearer. In addition to feeling happy to be involved in the Paralympic Games and grateful to the staff at the venue, he said it was a good memory with Deneb, who will be retiring in January next year. He has always been with Ryu whenever he goes to training. His athletic spirit will continue to burn as he aims to compete in Ironman Races, which are even more challenging than triathlons.