Approximately 1,000 guide dogs are active throughout Japan today.
There are 11 guide dog breeding organizations in Japan that train between 130 and 140 guide dogs every year.

The Act on Assistance Dogs for Physically Disabled Persons

Japanese society still lacks an understanding of the acceptance of guide dogs. In many cases guide dogs have given people with a vision impairment the freedom and confidence to go out alone, however, this independence has been undermined by stores and transportation facilities refusing entry to guide dogs. To facilitate the acceptance of assistance dogs, including guide dogs, and to encourage people with a physical disability to fully participate in society, the Act on Assistance Dogs for Physically Disabled Persons was established.

History of guide dogs in Japan

Dawn of guide dogs in Japan

A young American tourist came to Japan with a German Shepherd guide dog. This was the first landing of a guide dog in Japan.

The first guide dogs in practical use in Japan were four German Shepherds named Rita, Astor, Podo and Luthi, who were imported from Germany. They were trained in the Temporary Tokyo Daiichi Army Hospital for the social reintegration of soldiers who lost their eyesight in the war.

Due to the chaos after defeat in the war, the development of breeding guide dogs was stopped and the existing guide dogs died. As far as we know, the last guide dog, Sedo lived until September 1953.

The Service Standards for Passengers, which was issued by the Japanese National Railways, allowed visually impaired people accompanied by their guide dogs on the train.

The Chubu Guide Dogs Association of Japan was established.

With the Road Traffic Act revised, guide dogs were legally acknowledged. A notification from the Ministry of Transport allowed visually impaired people with their guide dogs on the bus and in the taxi.

A notification from the Ministry of Welfare requested of hotels and restaurants that visually impaired people with their guide dogs be allowed in.

A notification from the Ministry of Transport requested of hotels that visually impaired people with their guide dogs be allowed in.

The National Federation of All Japan Guide Dog Training Institutions was established as a joint organization of all the guide dog raising facilities in Japan.

The Ministry of Welfare notified medical facilities of receiving patients or visitors accompanied by their guide dogs. 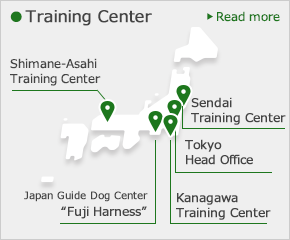